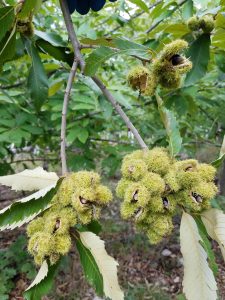 The Ozark chinquapin (Castanea ozarkensis), sometimes called the Ozark chestnut, is a drought tolerant hardwood tree that reaches up to 65 feet tall and 2-3 feet in diameter.  It inhabited the rocky upper slopes and ridge tops of the Ozark and Ouachita Mountains in Missouri, Arkansas, Oklahoma and Eastern Texas (see range maps) .  Ozark chinquapin are also found in northern Louisiana, Alabama, Mississippi, and Georgia. It may have made up to 20% of the species found in the temperate forest west of the Mississippi River. In some parts, the Ozark chinquapin was once a dominant forest species.  They produced prolific nut crops that both humans and wildlife found delicious.  It bloomed in late May to early June after the threat of frost had passed.  Seeds drop from September to the end of October.

The trees produced a bounty of sweet nuts every year without fail, and was sought as a nutritious food source by Native Americans, early settlers, and wildlife.  The wood was highly prized for its rot-resistance and made excellent lumber for barns, furniture, railroad ties and fence posts.  Many Ozark natives fondly remember stuffing their pockets with “chinkapins” on their way to school.

“The Ozark Chinquapin nuts were delicious and we waited for them to fall like you would wait on a crop of corn to ripen,….. they were that important. Up on the hilltop the nuts were so plentiful that we scooped them up with flat blade shovels and loaded them into the wagons to be used as livestock feed, to eat for ourselves, and to sell. Deer, bears, turkeys, squirrels, and a variety of other wildlife fattened up on the sweet crop of nuts that fell every year. But, starting in the 1950’s and 60′s all of the trees started dying off. Now they are all gone and no one has heard of them.”

This is a quote from a 98 year old Ozarks Mountains resident describing the role of the Ozark chinquapin trees played in the life of rural people.  To read more fond memories of the trees, click here.

The Ozark chinquapin was described originally as Castanea arkansana (Ashe 1923) but later renamed as C. ozarkensis by Moore (1992). Some authorities have recognized this taxon as the variety arkanensis (Ashe) G. E. Tucker of the Allegheny chinquapin Castanea pumila (L.) Mill., but recent molecular evidence indicates that the two are not this closely related.  Indeed, all three North American species form a distinct clade, with Ozark chinquapin as the basal lineage, sister to the group consisting of Allegheny chinquapin and American chestnut (Dane et al. 2003).  The Ozark Chinquapin is more genetically diverse than any other North American chestnut species.

The blight spread throughout the natural range of the American chestnut, and eventually reached the Ozarks in the 1960’s. Within a decade, the Ozark hills were littered with the dead, rot-resistant carcasses of Ozark chinquapin trees that reached up to 65 feet high. Today, the chinquapin survives mostly as root suckers that re-sprout after the above-ground portion of the tree is killed, and therefore very few seeds are produced to re-populate the species. There are still rare large trees throughout the range that have not succumbed to the blight.

The Ozark Chinquapin Foundation was founded in 2007 by a Missouri man with a vision of restoring the native tree to back to southern forests and woodlands.  Through the OCF’s effort, and the effort of volunteers over the last decade, we have been able to establish a viable seed base through research and manual cross-pollination of large surviving trees showing natural levels of blight resistance.  Our goal is to develop a pure Ozark chinquapin that are blight resistant, and make the seed available to anyone who wants to help restore the tree to its native forest range.