Avoiding “Dangers” of Chinquapin Hunting: Doing it the Right Way

Avoiding the "Dangers" of Chinquapin Hunting: Doing it the right way

By Chris Wyatt, OCF Board member and Arkansas Forester 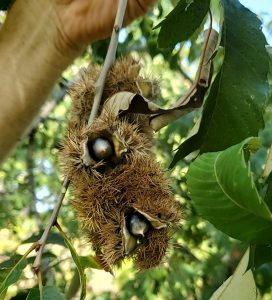 Chinquapin nuts were good for eating, making necklaces and playing a game Hully Gulley or Snake in the Grass.

In years past the nuts were so important that newspapers often reported when chinquapins were ripe. They also report the infrequent injury and even death associated with the tree.

In 1921 Troy Ogden of Pettigrew was throwing rocks to knock out chinquapins when a large rock came back and hit him in the head. A couple of hours later he went unconscious. His wife accompanied him by train to Fayetteville to get checked out. Helen Smith fell out of a chinquapin tree and broke her arm at the wrist.

Little Johnnie Roberts fell from a chinquapin tree and caused almost instant death. He was from Murfreesboro.

J.H. Neil’s daughter, six years old, swallowed a chinquapin hull and it lodged in her throat. Dr. Smoot removed the hull. Chinquapins were often cracked with your teeth. Swallowing them whole or sucking them down your windpipe was not an intended result. Sometimes the results were fatal.  Marion Clark Jones died at the hospital during an operation to remove a chinquapin hull from his throat.

These next two stories fall under the heading of “positively identify your target,” Thomas Kenan shot and wounded a young man who was on Mr. Kenan’s property up in a chinquapin tree gathering nuts. Mr. Kenan said he was shooting at hawks and not trespassers. Mr. Kenan was charged for assault with a deadly weapon.

As the Ozark Chinquapin Foundation works on chinquapin crosses that can withstand the Chestnut Blight, chinquapin hunting might return. Just be careful you are not one of these who were hurt doing an enjoyable sport. Usually about the middle of September is the time to gather chinquapins.

Watch how you get the chinquapins down from the tree. What you toss up will certainly come down. If you climb a tree use some caution there as well. And if you decide to crack a chinquapin with your teeth, well, just remember not to inhale suddenly while doing so.

Gathering chinquapins can and should be an enjoyable thing for friends and family to do. These stories from the past serve as an inspiration to avoid a few things. Once you have that in mind. Go look for chinquapins, gather them and enjoy!