Ozark chinquapin were common and widespread in the Interior Highlands and throughout its southern range before the arrival of chestnut blight, a fungal pathogen from Asia.  Cryphonectria parasitica was introduced to the United States on imported chestnut trees during the 1800’s. The disease was first identified in New York in 1904, and is estimated to have reached the Ozarks by the late 1930’s, precipitating the steady decline of the species, which now exists mostly as blighted stump sprouts in the forest. It is reported that when soldiers returned home from World War 2, they began asking what happened to all the chinquapin trees. 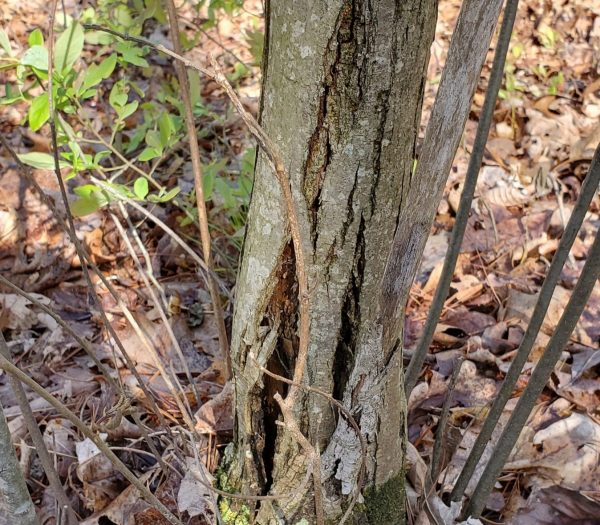 Photo above:  Blighted Ozark chinquapin which has sprouted around the base of the tree

Once a non-native pathogen becomes established, it can become a permanent resident in the native forest ecosystem and this seems to be the case with chestnut blight.

Chestnut blight is widespread throughout the USA, in China and Japan, where it is native, and in most parts of Europe that have significant populations of chestnut species. 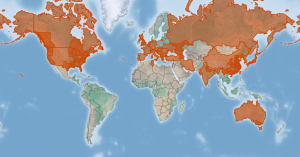 Chestnut blight is a weak pathogen on other species.

The major hosts are species in the genus Castanea; Chinese chestnut, Chinese chinquapins, Japanese chestnut, European chestnut, Ozark chinquapin, Alleghany chinkapin, and American chestnut. The Asian species, Chinese chestnut and Japanese chestnut are blight resistant but can develop severe disease; Chinese chinquapins from China, are hosts and Ozark chinqaupin and Allegheny chinkapin from the USA, are susceptible. Post oak & Live oak are the only oaks in North American to be seriously affected by the blight and some trees may be killed; scarlet oak is commonly infected by the blight. The blight is also known to infect maples and European hornbeam.

The oxalic acid secreted by the fungus causes lesions (cankers) to develop on the bark of stems and branches; eventually leading to wilting and death of the plant part above the point of infection.

The first evidence of infection on a blight-susceptible tree is a small, flat, orange-brown area on the smooth bark tissues of the main stem or branches. The lesions develop into sunken cankers as tan-colored mycelial fans develop in the bark (see photo). The margin of the cankers may swell slightly and the bark may crack. Small, yellowish to orange stromata containing conidiomata break through the bark and become larger and more numerous as the canker grows. Tendrils of conidia extrude from the stroma in wet weather. In the later months of the first year, papillae and/or the black necks of the perithecia become apparent on the stromata. Soon after, the canker expands around the circumference of the stem and is girdled and killed on susceptible trees. Wilting and death of the foliage above the branch or stem canker follows.

On older/rough bark, or on blight-resistant Ozark chinquapin, cankers may not be as obvious, and orange fungal fruiting bodies may be infrequent. Blight-resistant trees infected with virulent strains may have superficial and swollen cankers with thick dead outer bark, due to callused and swollen cankers, which develop after a small area of the vascular tissue under the bark has been killed. Intermediate cankers may be formed also with irregularly swollen and sunken areas within a canker.

Stem death can occur in normally blight-resistant Chinese chestnuts after severe spring frosts or at high altitude, but it is uncommon. 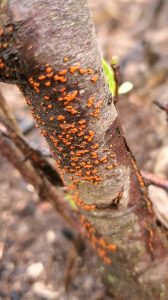 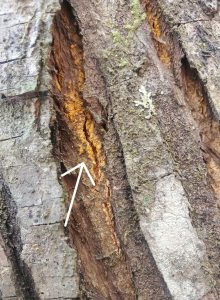 On blight-susceptible Ozark chinquapin stems, yellow-orange fruiting body, called stromata, are abundant, randomly distributed, and sometimes contiguous (touching) on smooth-bark cankers (see photo ‘A’). On rough-bark cankers of blight-resistant trees, orange stromata may be infrequent or inconspicuous. They may be found only in cracks and crevices between ridges. (see photo ‘B’)

Orange stromata (fruiting bodies) that burst through the bark are composed of both fungal & host cells, & contain conidiomata and ascomata. (Photo C)

The disease may attack a tree of any age, and any part of the tree. It is caused by a fungus, and this seems able to start its growth only in wounds of some sort, but when we consider the squirrels, insects, and birds which may make small wounds through the bark it is easy to see that there are numerous points of entrance.

It finds conditions most favorable for its growth just between the bark and the wood. Once started, it spreads rapidly and soon girdles the part upon which it’s growing. Only a small amount of tissue is actually invaded by the fungus, but the entire tree, limb, or twig is killed beyond that point. When a twig or limb is diseased, the spores or fruiting bodies of the fungus are washed down toward the trunk, which soon becomes infected and girdled.

The disease is most noticeable during late spring and summer. During this period, the recently killed or dying limbs are easily detected from some distance, on account of their discolored foliage. The leaves on a diseased branch turn to a reddish brown color, and finally wither, but they have a tendency to remain on the tree for some time. The burs on infected branches usually remain on the tree during the winter following its girdling.

Diseased trees very frequently produce sprouts or “suckers” in considerable numbers. These may appear on the trunk or near the base of the tree. Such sprouts soon become infected, however, and very few survive more than ten years.

A closer examination reveals the diseased band near the base of the affected portion. It is especially conspicuous on smooth bark, causing a reddish brown discoloration and producing numerous little pustules which break through the bark and set free vast numbers of spores. These spore masses are orange colored but vary in appearance according to climatic conditions. During warm, moist weather they are especially prominent and sometimes may be seen as long, curly, yellow threads issuing from the pustule.

Such threads are composed of countless numbers of spores held together by some sticky material. Rains dissolve this adhesive material and carry the spores to lower portions of the same tree or to others standing close by.

If older portions are attacked, the discoloration and pustule formation are not as visible because most of the pustules are produced in the fissures of the bark. Such bark, when cut through, is found to be discolored and breaks up easily. Tapping upon this bark will usually produce a peculiar dull sound.

The fungus may continue to grow in the dead bark for some time. It was not generally thought to be capable of growth in the wood, but three investigators have reported finding it upon the wood.

Besides the common so called summer spores mentioned above, the fungus produces another kind known as winter spores. They are most frequently produced during the late fall, and help the fungus to survive any unfavorable weather conditions. 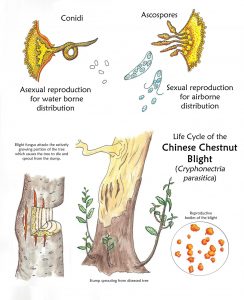