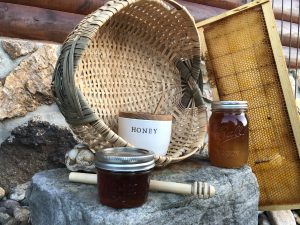 It has been a long time since anyone tasted honey made from Ozark chinquapin blooms. Precious few people are still alive who can recall the taste or anything else about the honey for that matter. But at one point in history honeybees found the Ozark chinquapin’s (Castanea ozarkensis) blooms and used the nectar to make honey. The dark amber liquid was distinctive in color, aroma and taste, thus giving our predecessors some distinctive memories. The sad part is it was such common knowledge at the time that no one bothered to say much about it. Today, that leaves us with more puzzle than answer.

Puzzles intrigue me, especially when they deal with the Ozark chinquapin. Scanty clues, and indirect references were all that I had to work with, but it was enough to get started. I worked on getting information about the honey that bees make from other members of the chestnut family. What I uncovered was interesting and at least gave me something to look forward to.

Ghost of Chestnut Honey Past:
Pioneers and settlers to the Ozarks or Appalachians would treasure a sweetener. Their main supply was sorghum, maple sugar or honey until cane sugar became more readily available. Of those three, honey required far less processing than the other two and provided a substantial yield. Some types of honey have distinctive flavors, colors and resistance to granulating.

Pioneers would store honey in deer hide bags, glass containers and ceramic jars. Pioneers would haul honey from wild hives in wooden buckets made of maple or beech to both protect it and prevent any additional flavor from being imparted to the honey.

Ozark chinquapin honey likely has a lot in common with other members of the chestnut group Castanea, which is the genus that chestnuts and chinquapins share. A comparison of honey produced from each species reveals they have similar attributes.

Let’s examine some of what the actual pioneers said to learn what they thought about chestnut honey. According to an interview with Noel Moore published in the book Foxfire volume 6, “. . . and the blossoms gave up one of the best honey crops we ever had. We’ve never had a honey crop like we did since the chestnuts died, because there’s not that much nectar in the wild now.” American chestnut trees were super abundant trees, and their blooms would have offered up an enormous nectar source to honeybees.

Moore went on to say, “Whenever chestnuts bloomed in the morning, early, the trees looked like just the whole tops were alive with honeybees working on getting the nectar. They really go for it.”
But the honey jackpot was not destined to stay full. Moore referenced the decline of the American chestnut and he was one of many.

In the Montgomery Alabama newspaper the Alabama Journal reported on June 27, 1942, “chestnut honey is another dark product but is getting scarce with the passing of chestnut trees from the Southern landscape.”

The American chestnut and its relatives here in North America have been decimated by the Chinese chestnut blight (Cryphonectria parasitica) that started its destructive march across the eastern United States in 1904. For this reason, honey formed from Castanea nectar is exceedingly rare.

To further my investigation, I looked for chestnut honey that I could purchase online. I wanted to see it and taste it for myself. I discovered one source that had American chestnut honey a few years back but nothing current. I also found a honey distributer that mentioned it had some honey formed with Allegheny chinkapin nectar. However, none recently for sale.

Fortunately, I found some chestnut honey in Europe. I eagerly purchased a jar of Italian chestnut honey made from the European chestnut (C. sativa) and tried it. My initial impression was that it is sweet like any honey and has a mild nutty flavor mixed in. There is a tannic acid aftertaste that I associated with the flavor of coffee. It may not be everyone’s cup of tea, but it still has that honey flavor and internet reviews are positive for the product. In Europe chestnut honey is utilized a lot for cooking.

The Savannah Bee Company has a website and blog that touched on American chestnut honey, “. . . honey produced from the nectar of these trees was dark and rich with a smoky nutty flavor and a somewhat bitter aftertaste.” The American Chestnut and the Loss of a Fantastic American Honey – Savannah Bee Company. April 3, 2015

Further into that same article for the Savannah Bee Company, the blogger writes about how European chestnut (C. sativa) would compare to our North American version (C. dentata, C. pumila, and C. ozarkensis).

“A close relative of the American chestnut successfully grows across Europe. Italian beekeepers are notorious for their amazing chestnut honey. I ordered a jar last year and it was fantastic! It’s definitely not as sweet as the {honey} I have eaten all my life, but delicious, nonetheless. The flavor is very nutty, spicy, and even a little smoky. And yes, it does have a slight bitter aftertaste.”

The website Honey Traveler says much the same things about taste, smell and appearance. It also touches on the honey’s resistance to crystalize and some of its chemical attributes.

“Chestnut honey has a strong aromatic taste and a slightly bitter after taste. Rich in pollen content, mineral salts and tannin, with a high proportion of fructose that resists crystallization and a relatively low acidity. Dark in color, ranging from yellowish brown to almost black, sometimes with amber hues, it has an aromatic, pungent herbal aroma and taste and slightly tannic (due to the tannin in the tree). The flavor is unique, not very sweet and with an almost bitter aftertaste and very persistent, highly appreciated by those who like a strong, less sweet honey. Blossoms from May to June.  “Honey Traveler: Everything about honey.” Chestnut Honey – Honey TravelerHoney Traveler

The Honey Traveler article goes on to say, “Of the common species of Chestnut trees, the Sweet Chestnut (Castanea sativa) grown mainly in Europe produces honey, and the Allegheny Chinkapin (C. pumila) grown in Eastern USA produces a strong and bitter honey. In Asia, the Japanese Chestnut (C. crenata) grown mainly in S. Korea is a source of honey. The Chinese Chestnut (C. mollissima), Henry Chinkapin (C. henryi), Sequin (C. seguiniii) are grown in China and may be sources of honey.”

It would seem that the Allegheny chinkapin had a particular reputation for bitterness. Sioux City Iowa’s newspaper printed an article on the honey sources that can make people sick. In that August 1950 article they specifically mention chinkapin honey, “There are honeys to which have commercial value but are definitely not good things to eat. You do not have to worry about getting sick on them, because you will not eat enough. Honey from the chinkapin plant (dwarf chestnut) is so sharp and strong that you will stop after the first taste.”

On June 4, 1930 an article on honey colors and flavors appeared in The Indiana Progress, “Nearly on hundred different kinds of honey are said to be produced in the United States. The color and taste vary greatly – from the water white clover to the dark amber buckwheat honey. ad the taste varies from the smooth, mild clover honey to the bitter quinine taste of the dark chinquapin honey.” Not exactly a ringing endorsement for chinquapin honey.

They were not alone in disparaging Allegheny chinkapin honey.

This assertion is backed up with more historical references. On May 25th of 1940 an Atlanta, Georgia newspaper, The Atlanta Constitution printed some insight on the flavor of chinquapin (C. pumila) honey. In telling a reporter the worries of a beekeeper Tom Cantrell said, “They’ll gather honey-dew from the broad-leafed trees, and nectar from chinquapin – and your honey’s as bitter as gall.”

Cantrell didn’t seem to be a fan of the taste. Neither did the USDA find it appealing. In a set of 1967 guidelines for inspecting honey they placed chinquapin honey (C. pumila) in the last category titled, “Honeys least desirable or even unpalatable.”

Here are some generalizations we can make regarding honey from chestnuts and chinquapins. All tend to produce a dark honey with a smokey or nutty flavor that can have a mildly bitter aftertaste, with the Allegheny chinkapin being the most bitter. While we don’t have any direct observations from the past regarding Ozark chinquapin honey’s taste and properties, we can only speculate. One day soon perhaps the Ozark chinquapin tree will become more common for beekeepers to have access to their nectar.

We should be cautious making too many direct comparisons between Ozark chinquapin and Allegheny chinkapin. While the two share a name. Ozark chinquapins are not as closely related to the Allegheny as you might think. Research by Joey Shaw at the University of Chattanooga has shown the Ozark chinquapin to be the less derived in the family tree and the Allegheny chinkapin and American chestnut being more closely related of the three species. For more information about this please visit DNA Research – THE OZARK CHINQUAPIN FOUNDATION (ozarkchinquapinmembership.org) So if C. ozarkensis and C. pumila are not so closely related, then it is not clear that the substances in their nectar will yield similar tasting honey. C. ozarkensis honey may be more similar to the American chestnut’s flavor of honey. We don’t really know for sure.

Here in North America, the Castanea relatives bloom at slightly different times. Allegheny chinkapins bloom first in May, followed by the Ozark Chinquapin in late May or early June. Finally, the American chestnut will bloom in late June or July. This timing would help beekeepers determine which plant is providing nectar to the bees, which would be valuable information where the species have ranges that overlap. Bloom time would of course be impacted slightly by geographic latitude and elevation.

Here in the 21st century, we have little notion for what honey made from the nectar of the Ozark chinquapin would truly be like. We can make some educated guesses, but the reality is we will all have to wait until these trees are more numerous before bees can yield Ozark chinquapin honey.

With the restoration efforts currently underway I am optimistic that someday many of us will have this curiosity satisfied as we make progress identifying blight resistant trees and restoring them to the landscape they once occupied. Once that happens we may yet again have a sweet treat as a bonus for all of this restoration work.