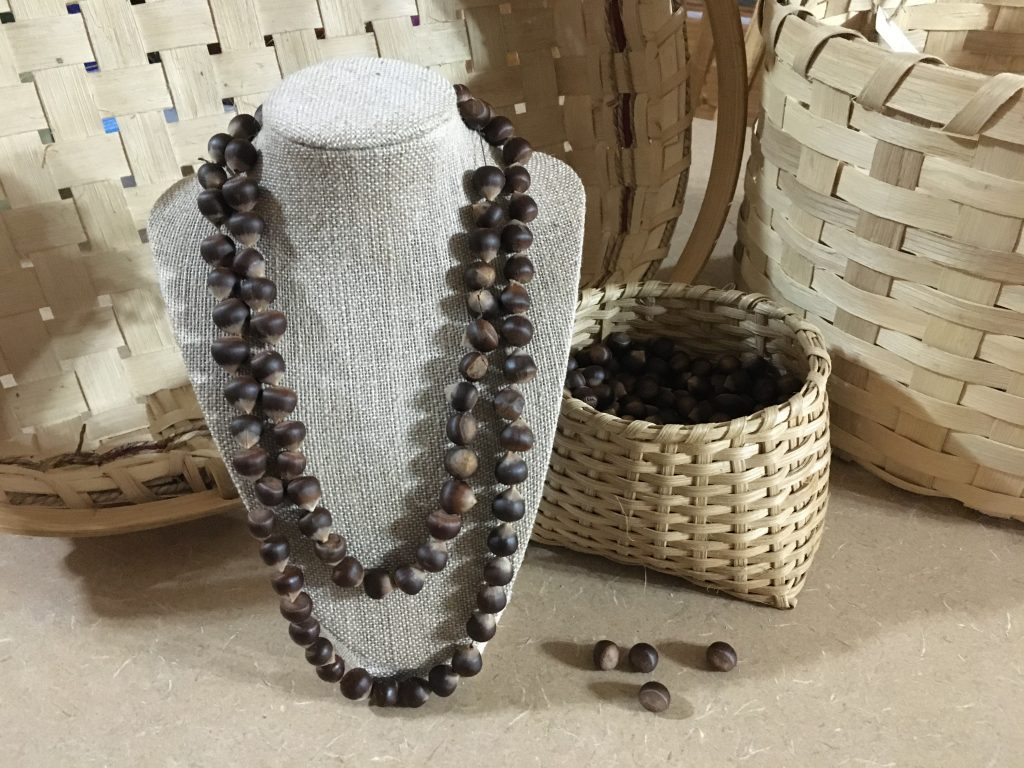 ” The mountain roads are never deserted this season for children are ever treading the roads hunting out chinquapins. Besides being a sweet little nut, the children find many uses for it. They string the nuts in long chains and wear them about their wrists and necks. One little girl with great ingenuity and patience made a sturdy and well-shaped work basket out of strings of the little nuts. ”

Chestnut brown is a pretty color and children recognize pretty without having to be told. Youth of the 1800s and early 1900s learned to make things with what they had available. So, if children wanted something beautiful to wear they often looked to nature for their inspiration. Each fall fresh chinquapins would ripen for collecting. Many were eaten straight away while others were collected for consumption on another day. In some instances, the surplus nuts were used to make a beautiful adornment in the shape of a necklace or bracelet.

Fresh chinquapins and chestnuts have a deep reddish chocolate brown color that is aptly called “chestnut”. The color was so distinctive it was named for the patriarch nut. Aged nuts loose the chestnut color in favor of a darker hue of brown but still retain a hint of their beauty. And it is in part due to the beauty of the chinquapin that children had necklaces.

The North Carolina, New Berne Weekly Journal newspaper published a brief report on September 26, 1902 about the chains of chinquapins, “The chinquapin season is on, and many ropes of little nuts can be seen around the necks of the wee tots around town.”

In another news account this one four years earlier, “The mountain roads are never deserted this season for children are ever treading the roads hunting out chinquapins. Besides being a sweet little nut, the children find many uses for it. They string the nuts in long chains and wear them about their wrists and necks. One little girl with great ingenuity and patience made a sturdy and well-shaped work basket out of strings of the little nuts.” As reported by the Asheville Daily Gazette on September 14, 1898.

A Louisiana paper reported of chinquapin festivities associated with Halloween in 1916, “The occasion was just the right one for Hallowe’en favors, so these were used. The house was decorated with ferns, autumn leaves and the ever-expected pumpkin. The dining room table was set with numerous pumpkin decorations, one in the shape of a jack-o-lantern for each child, with a lighted candle and filled with hickory nuts, chinquapin necklaces and kewpie candy, as well as several joints of sugar cane for each child. Autumn leaves were scattered over the table, and from the chandelier was suspended a basket of gay flowers and ferns, with yellow ribbons to each corner of the table.” The Times (Shreveport, Louisiana), November 5, 1916.

The task of pushing a needle through the nut is task best down when fresh. Dried nuts are particularly tough to puncture, and with the shape almost a sphere, holding on to them would be tougher yet. I am curious if there was a technique for doing this that avoided finger punctures or if that was just part of the process.

Finger pricking aside, beauty was the primary purpose for threading so many chinquapins, but it often succumb to the original purpose for gathering them in the first place.  The Richmond Dispatch reported on September 9, 1902, “The youngsters, however, first like to have the chinkapins strung on a thread and to wear them as necklaces. This desire for personal ornamentation, however, gives way to appetite.”

But the string of nuts may have served a deeper purpose. Women’s fashion in the 1800s and early 1900s didn’t often include pockets. This is why aprons and bags were important to hold valuable and useful items. A necklace of chinquapins would have been a clever way to hold onto your precious lunch when going to school or wherever you were headed.

Sometimes the ensemble had value beyond convenience of the wearer. In a report on what was for sale at the local market included, “On a string at the market for five cents—Chinquapins.” The New Berne Times. October 1, 1873. A string full of chinquapins would garner 5 cents. That price would not bring much respect in this century, but keep in mind that nickel would be about enough to purchase a quart of milk or a bar of soap back then. Sell enough and you could contribute to your family’s well being.

These young necklace crafters were entrepreneurs in other parts of the country too. Read this excerpt from the Knoxville Sentinel on September 29, 1909, “Now, as in the primitive days, girls and boys from the country may be seen on the streets, with long strings of chinquapins around their necks which they are disposing of to the people at a goodly price. The children from the country attract a great deal of attention as they walk down the streets. In many ways they resemble the “Gypsies” who travel the streets in their picturesque garbs, care free and happy with the few nickels they receive from the nuts that they gathered by their own skill.”

Roughly a decade before this we read from Semi-weekly Knoxville Sentinel Knoxville Tennessee, a similar report focusing on the children of the city purchasing their chinquapin necklaces, “A familiar sigh on the city streets just now is the chinquapin sellers. The nuts are brought in, strung together, and find ready purchasers, especially among the children.” September 13, 1893.

Buying or selling chinquapins depended completely on what a child had available to them. If they had bushes and trees they collected chinquapins and made necklaces. If they lived in a city away from this resource they bought them. Children were not the only ones to adorn themselves with chinquapin necklaces; adults were known to do it too as seen in this Alabama report. “The bride was enrobed in a clean but faded dress. Her necklace was composed of a string of chinquapins, her brow was environed by a wreath of faded bonnet flowers, and her wavy red hair was tucked behind in the old-fashioned way.” Montgomery Daily Mail, April 29, 1864.

Ozark chinquapins and Allegheny chinkapins both were used for these necklaces due to their shape. Both are round in cross section and have an overall water drop shape. They would make beautiful “pearls” for a homemade necklace. American Chestnuts usually bear 3 nuts per bur causing them to develop with flat surfaces that would not be so pearl-like in appearance.

Today, children have different way of making themselves beautiful. At one time, all it took was a string full of chinquapin nuts. And if that child needed to address their hunger status all they had to do was unstring a few chinquapins and chow down. Because the nuts are so sweet I sincerely wonder how long some of those necklaces really lasted.