The American Castanea species have not recovered from the devastating effects of fungal colonization by Cryphonectria parasitica, even though many efforts have been made to combat the disease. Population genetic studies conducted on surviving American chestnut populations indicated that the species has a lower level of genetic diversity  than Chinese  and European Castanea species (Huang et al., 1994b, 1998; Villani et al., 1991). The mean genetic diversity of the surviving Ozark chinkapin populations was found to be greater than that of the relict American chestnut, even though its range at the present time is limited mostly to the Ozark mountains.

C. Dentata (American chestnut), C. Pumila (Allegheny chinkapin) and C. Ozarkensis (Ozark Chinquapin) studies with isoenzymes suggested that C. dentata was the least variable of the North American species, with an He of ~0.18 (mean expected heterozygosity) (Huang et al. 1994b, Huang et al. 1998), followed by C. pumila with an He of ~0.30 (Fu and Dane 2003) and C. ozarkensis with an He of ~0.27 (Dane et al. 1999), similar to that found in other woody plant species (Hamrick and Godt 1989). Huang et al. (1998) also showed evidence for possible glacial refugium in southern populations of C. dentata after evaluating the variation in ~1000 trees from 18 sample sites using RAPD and SSR markers. This is consistent with the hypothesis of a single metapopulation that continued to evolve due to genetic drift (Kubisiak and Roberds 2006). Asian and European Castanea (Villani et al. 1991a, b, Huang et al. 1994a, Lang et al. 2007) levels of genetic diversity based on isoenzymes appear to be similar to those reported for C. seguinii (He ~0.20), and levels reported for C. pumila appear similar to those reported for other Castanea; C. mollissima (He ~0. 31), C. henryi (He ~0.26), and C. sativa (He ~0.24).

His findings revealed that the Alleghany Chinquapin (C. pumila) and the American Chestnut (C. dentata) are more closely related to each other than they are to the Ozark Chinquapin. 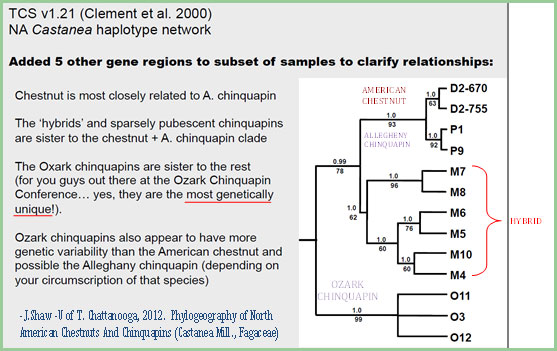 Video of Prof. Shaw presenting at our Annual Meeting, 2015

The study of the morphology, genetic diversity, and phylogeography of the American Castanea species can potentially help us find blight resistant populations to cross-breed while still keeping genetics pure. This series discusses the methodology of gathering this kind of information from field work as well as gathering DNA from samples of tissue (leaves, nuts, etc.).