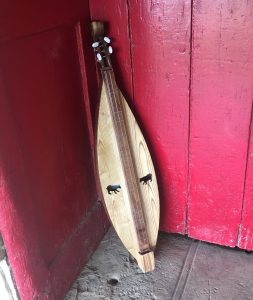 I developed an affinity for mountain dulcimers thanks to my first boss back in the late 1980’s. Jack Smoot built and played them which is what gave me exposure to them. While I didn’t take much interest at the time, they grew on me. Thirty years later I found myself interested in making them myself. 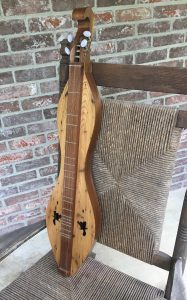 First, I built a dulcimer from a kit and used my own slab of American chestnut for a top. (Image 1) Then, I discovered a gentleman a few miles from where I lived who made them and I asked if he would teach me to do this from scratch. So, under his tutelage I made my second dulcimer. This involved cutting and paneling all of the lumber from rough sawn board to finished product. No kit here! (Image 2)

For my third I branched out on my own and built one without directions or supervision. A little scarier because I didn’t want to mess up. For the fourth I really wanted to make something special. I wanted to use Ozark chinquapin wood. My desire to use the chinquapin wood for an instrument wasn’t simply a general aspiration drawn from thin air. There was a history of its use for making musical instruments. Its cousin the American chestnut had similar uses in the Appalachians.

My first two dulcimers were made of walnut and wormy American chestnut just like Robert Mize in Firefox described. I enjoyed the build on both and felt I was ready for a slab of Ozark chinquapin to work with. The catch is the tree is exceedingly rare, and I was completely unwilling for a live tree to be harvested for any project no matter how worthy I thought it was. I would just have to wait.

In summer of 2012 the Ozarks had a dramatic heat wave and drought that hurt a lot of trees of every species. One of the trees in southwest Missouri that the Ozark Chinquapin Foundation worked with for pollen and seed production died during that drought. While this was a loss, the tree’s genetics live on in seeds that were successfully planted on other sites around the Ozarks. And just to make the best use of it, the wood was sawn up into boards for special projects like this one. It was also the source for the dulcimer played by the Mulhollans. I intended to make the most of it.

In this article, I will explain what I did to make a dulcimer and make comments about historic dulcimers. In this way, you can compare and contrast some of the similarities and differences of historic and modern dulcimer making.

It is helpful to know some dulcimer vocabulary which is supplied in Image 3. 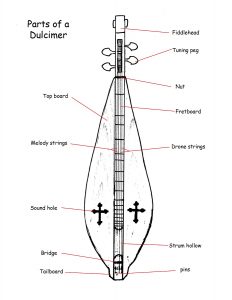 In the middle 1800’s saw mills were not common. Where they existed, the mills were water powered (Image 4). So, if an Ozarker wanted to make a dulcimer he would have to cut down a tree and rive out the pieces himself. Splitting, also known as riving, either involved an ax or fro and then the wood was reduced to smooth dimensions with a hand plane. The long planes removed ridges and bumps smoothing the wood into uniformity and correct thickness. It would take many passes to get the wood to the correct thickness and result in a large pile of shavings. 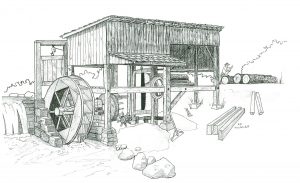 Later as sawmills spread thanks to the steam engine and rail lines that could deliver them, settlers may have obtained thin slabs of wood from the local mill. They would still have to plane it to desired dimensions. Living in the Ozarks meant they had that skill anyway so it wasn’t a huge burden.

Whether they rived the wood themselves or got it from a sawmill depended on what residents had access to and could afford. Either way a lot of hand work was involved to get basic parts to make a dulcimer. Several days of work were involved with just obtaining and preparing the parts.

In modern times I took some 4-inch-wide boards and cut them into smaller ¼” thick slabs that I would glue together like the wings of a butterfly. This was called book matching and gave a symmetry rare in a single piece of sawn wood. These pieces were used for the top and back. Book matched sides were popular too even though they were never glued to each other. They go on opposing sides of the dulcimer.

Getting boards sized down to 1/8” thickness required plenty of plane work. Today, I used an electric powered planer but the desired end result is essentially the same. (Image 5) 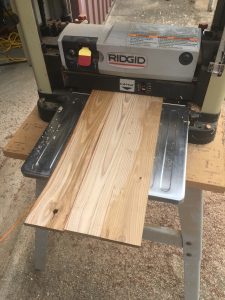 Walnut is a hard wood that works well for fine construction like a musical instrument. After working the Ozark chinquapin wood, I found it much harder than cedar and even harder than the walnut. Sanding took longest when working the chinquapin wood. I used a finger plane to trim the edges of the top and bottom boards after they were glued to the sides. The chinquapin wood worked exceptionally well with the finger plane without chattering or gouging. It was a joy to work with. Some modern dulcimers makers would use a router to trim the top and bottom board. I preferred the finger plane. 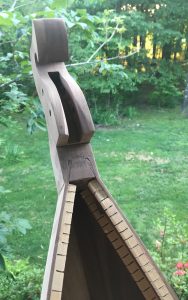 Fiddle heads and tail blocks were cut from larger chunks of wood and had a thickness to them. Ozarkers often used a wooden large blocks and had no need to glue pieces together. They used saws, chisels, knifes and files to shape beautiful and ornate heads in which to set the string pegs. Today thinner layers of wood can be laminated together to make effective fiddle heads and tailboards in an age where board stock is the most common resource (Image 6). The string turners used to operate on friction, and were large and made of bone or rosewood. Historic string turners depended on friction to hold the string tight. Modern fret turners use gears to accomplish the same goal. Some historic dulcimers had only three strings while others were four to six.

One of the most important and tedious parts of a dulcimer is the fretboard (Image 7). Exact dulcimer sizes varied in terms of length, width and even height. But fret sawing and spacing was an exact art. Mess this up and strings rest on the frets, or the sound is off because a fret is too far up or down along the column. Frets can be too low, too high, crocked and troubleshooting becomes a challenge. In modern times string instrument makers, also called luthiers, cut thin kerfs and hammer fret wire down into the kerf. The frets in cross section are a T shape with rounded tops. The thin vertical section has small protrusions to grip the inside of the kerf. Fret wire works exceptionally well and simply needs the ends filed and sanded smooth after being clipped off with cutting pliers (Image 8). 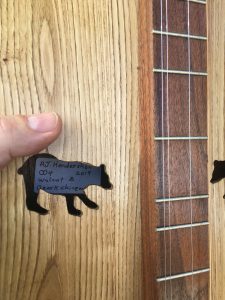 Image 8.  Fret board and sound hole

Before fret wire was manufactured and available to builders, Ozarkers used fence wire to bend into the shape of a shallow staple. These wire frets were then gently driven into predrilled holes atop the fret board. Exactness was still expected. A few dulcimers only had frets placed under the two strings they strummed. These are known as melody strings. The one or two drone strings (strings furthest from the player) were fretless underneath because they never get pushed down to the frets.

The metal wire strings ran across and slightly above the fretboard, starting at the turning pegs and terminating at the nails on the tail board. To keep the strings up over the frets was a nut and bridge. A nut and bridge were made of a hardwood or perhaps cow horn or deer antler. It just had to be hard and allow a small kerf on the top. The nut was near the fiddle head and the bridge was at the bottom. I used a slab of bison horn on mine for original flair (Image 9). It is fascinating that the strings were once made of metal just like today. Historically, the wire likely was recycled from some other item that lent itself to being a musical instrument string. 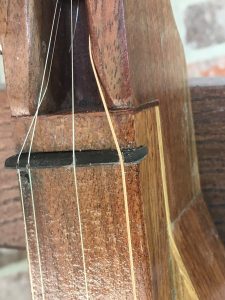 Once all of these parts are procured then comes the assembly. This is no crude box made for toting tools or for storing rusty nails. This is a superior work of art with immaculate edges, and glue joints. A few older dulcimers from the Appalachians were nailed together with larger peg blocks placed on the inside for strength and nail placement. If gluing, the old timers used hide glue which is water soluble, so they could steam the instrument apart if repairs were ever required. Hide glue can be made by boiling leather shavings and hooves from deer and livestock. Modern high-end instrument makers use hide glue yet today, most hobbyists simply use a quality wood glue.

Glue choice aside the joints need to be tight, lacking gaps with near perfect sanded sides. The edges seem to flow right into the next piece. This helps give the instrument its beauty. 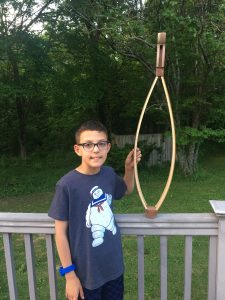 Image 10. AJ’s nephew holding tail board, sides, & fiddle head after being glued together

The fiddle head, tail board and sides were glued together first (Image 10). The back gets glued up next and trimmed (Image 11 & 12). Sound holes must be cut and I chose black bears for mine because they ate a lot of chinquapin nuts. The fragile parts get re-enforced with thing narrow slices of wood from underneath to provide support. As this is under the sound hole they will never be seen or affect the sound. Then the fret board with frets installed is glued to the top board (Image 13). 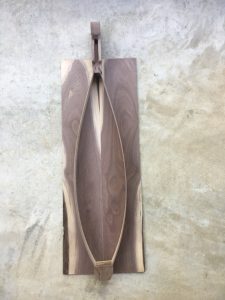 Image 12. (above) Back piece is trimmed 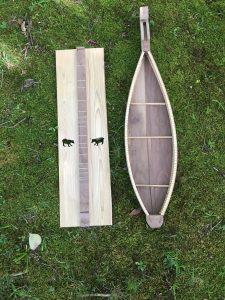 Image 13. Fret board is glued to the top of the dulcimer

Following this the top is glued in place and trimmed (Image 14). From here the instrument is sanded and given a finish (Image 15). Many historic instruments didn’t receive a finish. They got darker with age and handling and that was it. Some were given varnish or linseed oil as a finish. I used 4 coats of tru oil with a light scratching with steel wool in between coats. 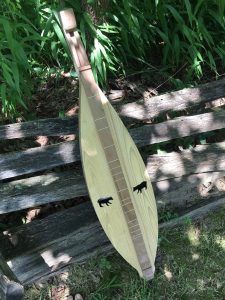 When I considered how much effort went into making an instrument properly with today’s methods, I can’t help but respect these instruments as a work of art. Each instrument has to be strong, beautiful and sound good when played. Then, I thought about century old dulcimers made with hand tools, without internet, mail order supplies, or blue prints. Did those builders of yesterday simply see a dulcimer and then recreate it after careful study? Thinking of all this work and innovation I found myself in awe of pioneer construction. Old black and white photos of hill dulcimers came alive with their story of creation. (Image 16) borrowed from Chet Hines 1973 book “How to Make and Play the Dulcimore”) 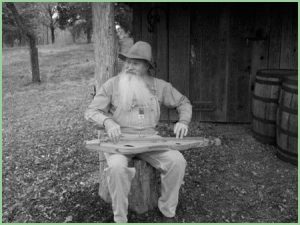 Image 16.  photo from Chet Hines book “How to Make & Play the Dulcimore”

Remember the whole reason I did this was to show people what could be done with Ozark chinquapin wood. The sound, the texture and even the visual appeal is fantastic. Stimulating the senses in this way is so much better than simply telling people the wood is valuable. Once affected by the music of the dulcimer it is easy to say this tree has value and needs to be saved.

One day it is my hope that the Ozark chinquapin tree is saved, its disease resistant relatives are planted all over the Ozarks and some are even planted as a crop for fine wood working use, in addition to nut production. I hope dulcimers, fiddles and banjos are once again proudly made in the Ozarks using the beautiful wood to help construct them. It just seems right that former uses become possible once more as we save this American treasure.