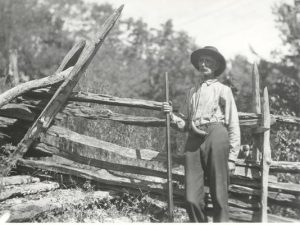 by A. J. Hendershott

A modern fence post is a metal object driven in the ground, strung with wire and meant to stand for years and even decades.  Most fences are meant to keep livestock in a particular pasture or barn lot.  Most of us would think that is the way it has always been.  But short trip back in time show us that fences served similar but slightly different purpose and the thought that a fence would last decades was just a dream, unless you chose your post properly.

Over 100-150 years ago fencing took a lot of time and energy.  So you might take several days to cut enough trees to make a proper pile of posts.  If the cutter was blessed, then his trees would be 10-24 inches in diameter with 10-12 feet in height before any large branches developed.  The log was split lengthwise into four quarters.  With enough of these components you could make a split rail fence.

The Ozarks was and continues to be a rocky rough place to put up a fence.    Split rail fences didn’t have to go in the ground and they didn’t require any nails.  Just plenty of wood and some simple tools.  With all of the work that goes into these fences you might be surprised to know that during the 1800’s most livestock were let out to free range while the garden, vineyard and yard was fenced in.   The fences didn’t keep the livestock in most times.  It kept them out! Less fencing was needed.

But anyone who makes a split rail fence will tell you that wood choice matters and if the fence is made from hickory, oak, ash, maple or any most any other hardwood, it will have to be replaced every 10 years due to decay.

That story will change if you make one change.  Use a rot resistant wood.  Eastern red cedar, locust or Ozark chinquapin were preferred choices because they would last for several decades.

As the age of barbed wire fences came around the chinquapin fence post still found favor thanks to its longevity.

Warren Langham of Fayetteville, Arkansas remembers making chinquapin fence posts for cattle fencing and said, “The trees were 20”-26” through.  They were large.  Dad used a hammer and wedge to split the trees then he sharpened one end and used a sledge hammer to drive them into the ground.  We put fence wire up on those posts.”

Just use a large staple to secure the wire to the post and move on down the line.

So coveted were these chinquapin fence posts that they were sought by farmers.  A post maker advertising his wares in the Neosho Times in 1925 said, “Posts for sale:  I can furnish sawn posts from sound post oak and chinquapin, any dimensions for fences and vineyards.  Write for estimate on your requirements.  C.H. Roseberry, Stella, Missouri.” 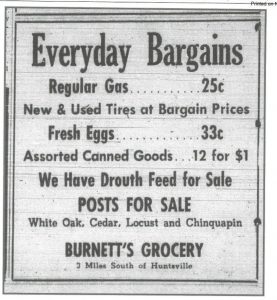 Even a grocery store in Huntsville, Arkansas got in on the action by advertising fresh eggs, assorted canned goods and “POSTS FOR SALE: White Oak, Cedar, Locust and Chinquapin.”  October 14, 1954.

A 1959 Madison County Arkansas auction advertised in the Madison County Record listed, “approximately 400 Chinquapin posts,” along with other farm and household items.

Richard Surber of Woolum, Arkansas recalled his fence posts lasting a long time.   He put some posts in back in the 30’s and thought they, “might still be in if they did not burn up in a forest fire.”

What makes the chinquapin, cedar and locust so rot resistant is the residue the trees deposit in their heartwood cells. Xylem cells are hollow dead cells that carry water through the tree.  They form the heartwood of a tree and collect chemicals that are essentially a waste product. In some cases (like the chinquapin) the waste residue is what makes the wood rot resistant.  This also makes the tree useful for riving shingles or coffin construction.

Sam Younger of Saint James Arkansas remembered the chinquapin being used for practical items beyond fences.

“We cut the wood for cross ties and fence posts.  Could’ve used ‘em for barrel staves, for dry barrels and oil barrels, but we never cut any for that.”  Younger said, “It did split pretty good though.”

So, as you drive around the Ozarks you may see a few split rail fences which provide a longing look back at the way things used to be.  If you are driving around the western sections of the Ozarks some of the wooden fence posts, you see holding up barbed wire could easily be made of chinquapin wood.   You just never know.