Fond Memories Of The Trees 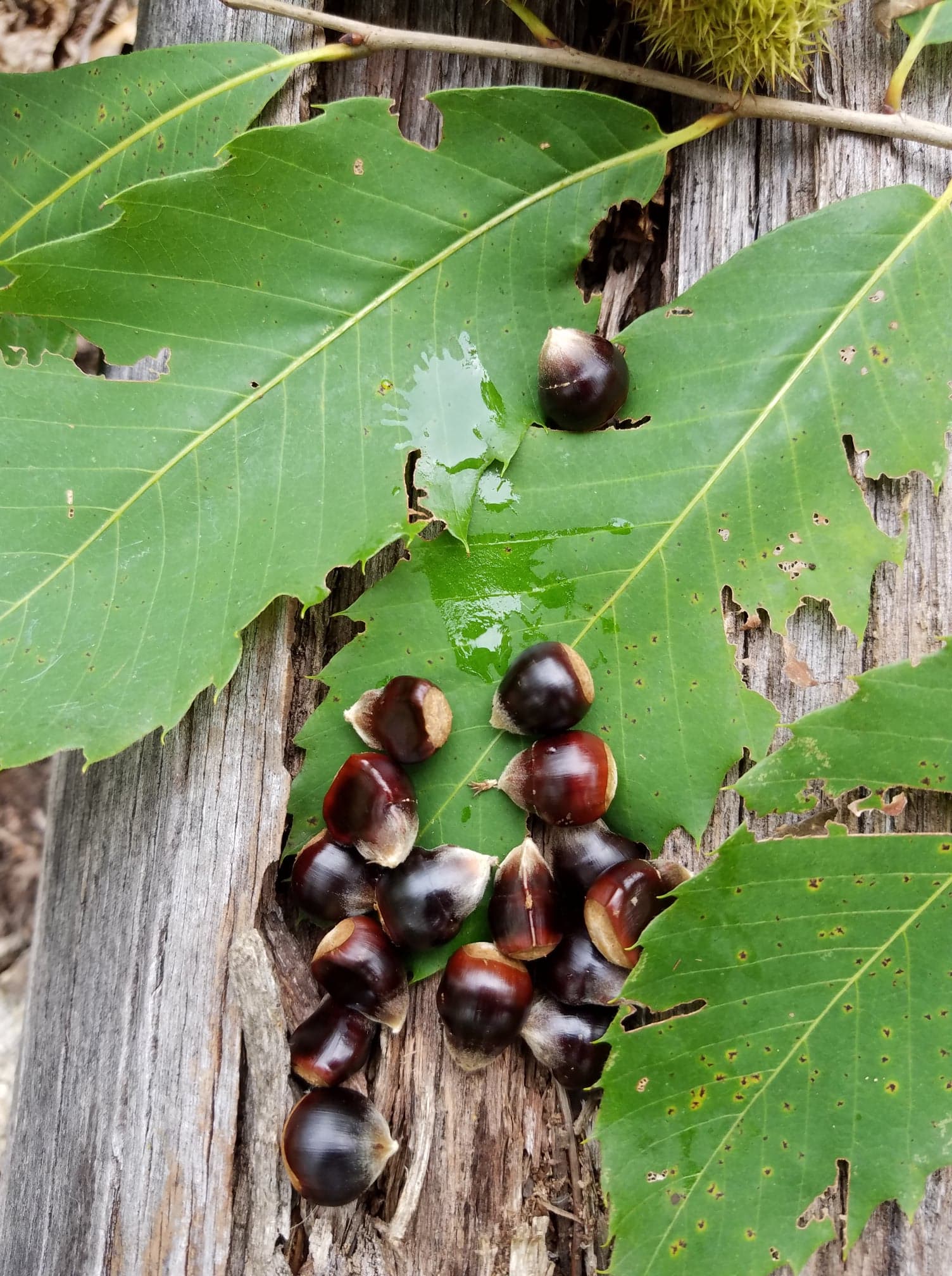 “My Grandma use to have two great big Ozark Chinquapin trees in her front yard and we would fill our pockets full of them on weekends and then go to school on Mondays and eat on them all day long and pass some of them to friends to eat. They was so thick on the ground they would just cover it. We would also climb around in the trees.”  —Jerry M., 66 year old Missourian

“I can remember the Chinquapins years ago. I haven’t seen one in 30 years. I logged in my younger years and we cut a many of them down for posts. They made great posts for the fences. The land was being cleared off by the acres and fences being built. The trees of this area are nothing like they were when I was young. Most all the great big trees are gone and these old hills are bare compared to what they used to be. I am afraid for the future generations who will not have the great resources that we used to have. The logging companies and landowners are cutting down way to many trees and replanting next to none. We need to teach the younger generations to conserve and plant more trees.”—Frank K

“I did learn from a friend of mine who grew up about 1 mile from the chinquapin tree that chestnut trees were alive and producing in this immediate area when he was born in 1933. They continued to live until he was big enough to go to the woods alone and pick them up as he walked to a nearby country store. He says they had to have lived until about 1943. Chinquapins were very abundant in the same woods. The two trees grew in the same area of the woods. He can only remember the chinquapins getting 8-10 dbh. He worked for a timber company as a young man and knows trees very well. The local area is a large sand hill rising up 150 feet over the Jackson Prairie soils nearby. The hill is about two miles in diameter thus covering a fairly large area. I know of several locations on it that have had very limited timber harvest and he has told me of other areas on the hill that he remembered both trees.”—Jack H. from Mississippi

The Ozark Chinquapin nuts were delicious and we waited for them to fall like you would wait on a crop of corn to ripen,….. they were that important. Up on the hilltop the nuts were so plentiful that we scooped them up with flat blade shovels and loaded them into the wagons to be used as livestock feed, to eat for ourselves, and to sell. Deer, bears, turkeys, squirrels, and a variety of other wildlife fattened up on the sweet crop of nuts that fell every year. But, starting in the 1950’s and 60′ all of the trees started dying off. Now they are all gone and no one has heard of them.”—Harold, 85 year old Missouri outdoorsman describing the trees before the chestnut blight reached the Ozark Mountains of Arkansas and Missouri.

“Magnesium Limestone Soils, which are based upon and derived from the magnesium limestone or mineral bearing series of southern Missouri, and produce black and white walnut, black gum, white and whahoo elms, sugar maple, honey locust, rock chestnut, scarlet and laurel oaks, blue ash, white and shell bark hickory, buckeye, hazel, sumach and dogwood. These lands occupy the slopes, hillsides and narrow valleys of the southern and southeastern part of the state, and the northern slopes of the Missouri west of Boone County.”—1879 book entitled Switzler’s Illustrated History of Missouri.   In it he references on page 529 all of the trees that occur in Missouri and includes chestnut among the oaks, hickories, beech, poplar, cottonwood, pine, etc. 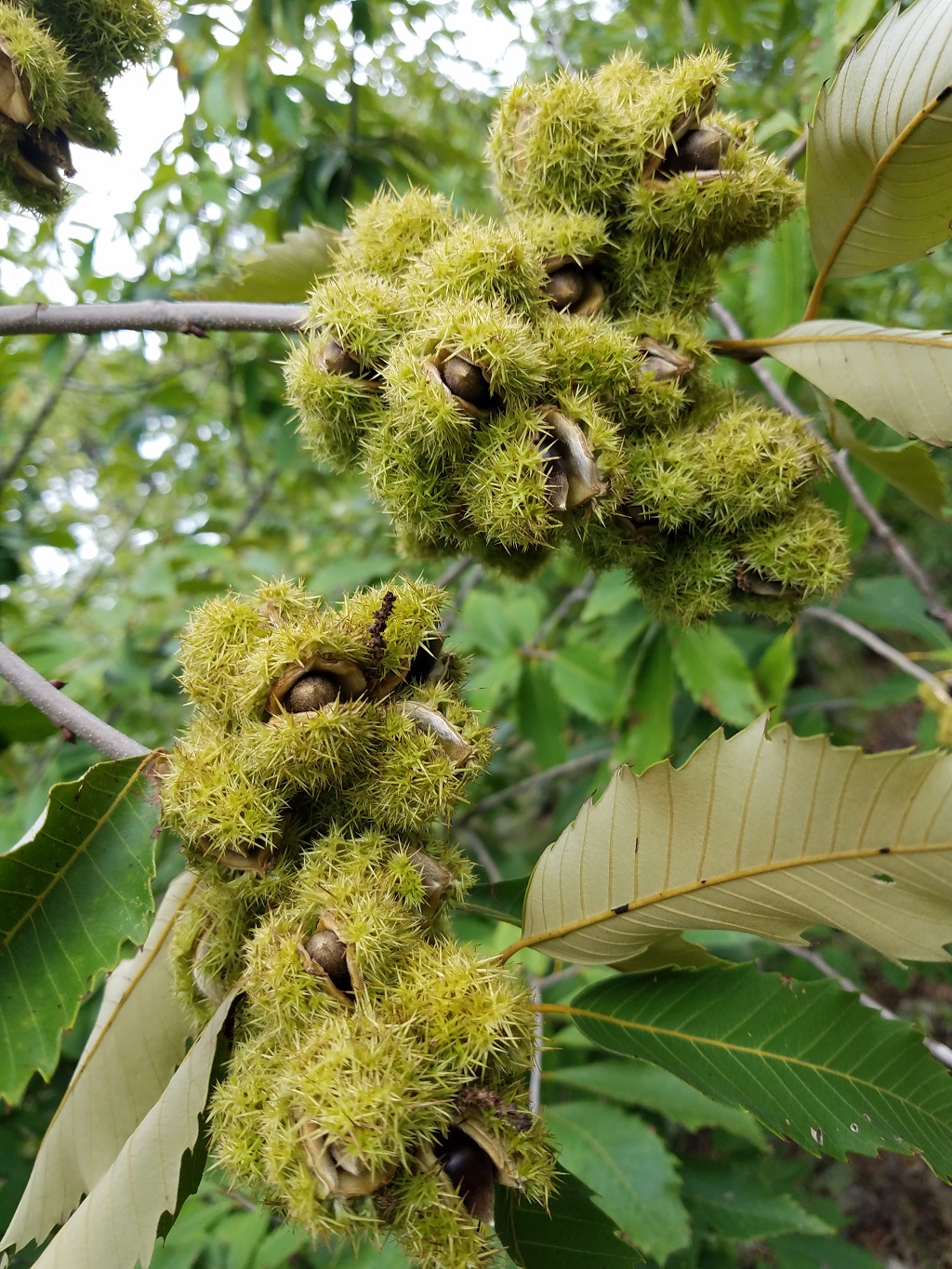 This story was related to my Dads cousin Glen Burford who is 86 years old this year. Mr. Burford grew up in the small community of Welcome Arkansas located in the South Western corner of Arkansas in Columbia County. His house was only about a mile from the Louisiana State line and surrounded by woods on all sides. Growing up in the 1920’s and 1930’s Mr. Burford remembers well when the forests of South Arkansas were full of Chinquapin trees. In the area around their home place where his family hunted there were hundreds of Chinquapin trees scattered throughout the woods. He said some of these trees were quite large and had huge crops of nuts every fall. One of his favorite pastime was squirrel hunting. Glen said all you had to do to find the squirrels was go to the Chinquapin trees and they would be working alive with the furry little animals. He and his friends got many a dinner from the squirrels he shot out of those Chinquapin trees. Another thing he remembers about the Chinquapins is that there were several on the road that they walked to school on. When the nuts were ripe in the fall they would shake the trees and pick up a pocket full to take to school to snack on during the day. He also remembers how bad the burs would hurt if you stepped on one with your bare feet. Stories like his are pretty much the same throughout the state with people that lived in his era.

Mr. Burford said in the late 40’s and 50’s all of the trees started dying out because of some kind of blight. He was not familiar with the story of the Chestnut blight that swept the eastern US and killed the American Chestnuts. I told him that same blight was the cause of the Chinquapins disappearing. The sad part is that hardly anyone under 60 years old even knows what a Chinquapin tree is. I hope that people like us can change that and restore one day the Chinquapin to the forest of the south.

“I have been growing Chinquapin trees for the last 11 years and at first I thought the C. pumila was the only Chinquapin that grew here in S.W. Arkansas. However now I believe that maybe the Ozark Chinquapin may have once ranged this far south.”—Larry W. B. Jr. – Southern Arkansas 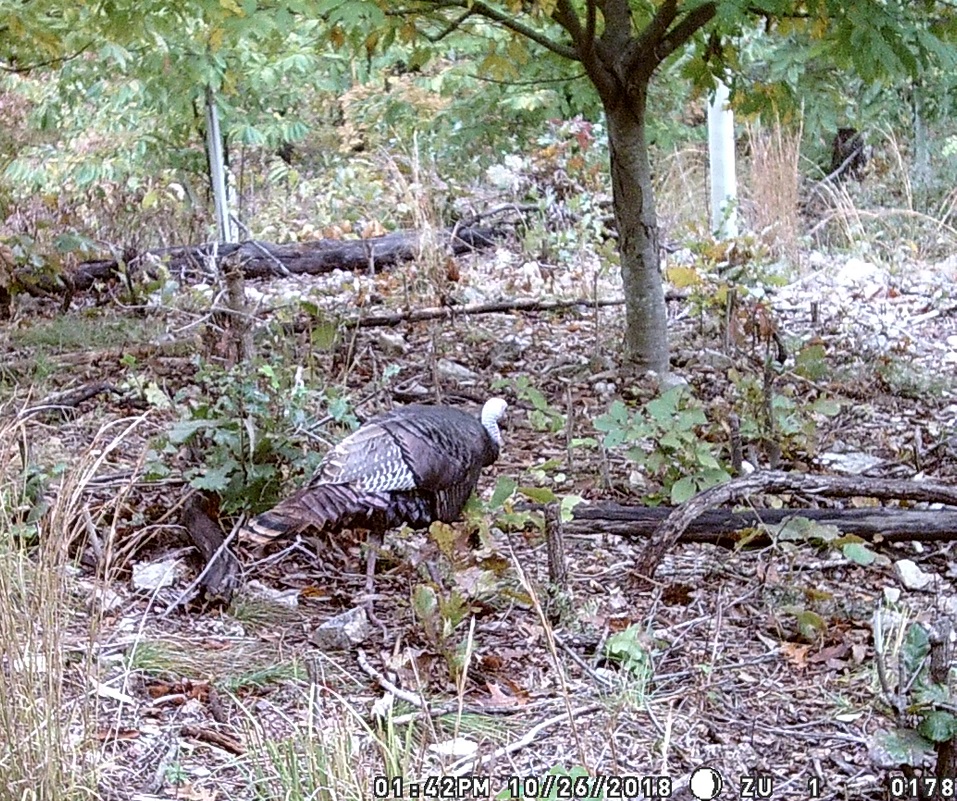 “I remember the trees when I was a kid growing up in Oklahoma. I used to walk in the woods with bare feet, my skin was tougher then. But I’d step on those burrs and boy it would hurt. They are the sweetest nut you ever did want to eat.  I remember a tree back in 1963 that was just loaded with them chinquapins. They grew on a hillside, down a gully, on the bank of a creek, they just grew all over the place but not real abundant. In Oklahoma the biggest ones I saw were 7-9 inches in diameter.  I would love to see another chinquapin before I die but I don’t think I ever will.”—Tino B., Cherokee descendent and lifetime resident of Oklahoma recalling his memories of Ozark chinquapins before the blight reached Oklahoma

“I had never heard about the Chinquapin tree or seeds until listening to the testimony in a trial about a parcel of land in my courtroom this week. It seems that they were very plentiful in the 1940-1950’s in a part of Montgomery County, producing tons of seeds. Witnesses testified to shoveling entire pick-up truck beds full of seeds- used to snack on and to feed the cattle. They all mentioned that the Chinquapin trees are all gone now. I’ll be sending you a check soon for membership and seeds.” —Thanks, KH

“I first heard about chinquapins when I was 3-4. Dad lived through the Depression when nobody had anything. My dad liked to make sure we had something special for Christmas so we had roasted chinquapin nuts. To do this he placed chinquapin nuts in a bread pan and roasted them on a stove. He didn’t leave them in there too long. He’d cook ’em long enough so he couldn’t put his hand in it. This was long enough to kill that little egg for the worms. If you tried to keep a fresh bag of chinquapin nuts without roasting them first, you would end up with nothing but a bag filled with worm dust.

I remember coming home on a school bus and there was some big ole chinquapins along side of the road. The ground would turn black from the chinquapins. The bus driver would stop and let us get out and gather chinquapins. Boys would put them in their pockets while girls would pul up their dresses to make a bit of a pouch to hold theirs.  Squirrels went wild over ’em. But there was always enough chinquapins for everything. People and animals alike.

Mother took us to the chinquapin tree behind the chicken house. We would gather chinquapins and played Hully Gully. To play you cupped your hands with some chinquapins inside. You rattled them about and let someone else listen to it so they could guess how many was inside. If they guessed right they could have all the chinquapins in your hand. If they were off then they had to supply that same number they were off to the person who held the chinquapins, to make up the difference. Mom never had to pick up any chinquapins. We made up the difference most of the time. If she lost it wasn’t very often. She could just tell by the sound of the nuts rattling.”

On Medical Use of Ozark Chinquapin

“One year I was real worried. I had two kids and they both had the whooping cough. My one year old baby girl had the whooping cough and coughed so much it made her eyes bloodshot. My four year old son was sick and in the hospital and we were scared he was going to get the whooping cough too. Whooping cough is caused by a virus so antibiotics won’t touch it. The doctors had tried everything so my dad came over to tell me what to do. He is of Cherokee heritage. I began to tell him how nothing would work. Dad said, “I didn’t come over here to listen to you, I came here to help you. Now go get some chinquapin leaves to make a tea. At that point if he had said to go get manure we have tried it.  Dad told to ” collect chinquapin leaves and boil them to make a tea. It’ll be bitter so add honey. Each cough stick a spoon in their mouth.  I said it was winter and the trees don’t have leaves. Dad told me, ” there you go trying to tell me instead of listening! Now go out and find a new shoot because the leaves don’t fall off those. And you know he was right.  I brought those leaves back and began to boil them. We had a white granite stirrer (enamel coating) and those leaves left a stain up to the water line that nothing would take out. I tell you that I gave it to my daughter and son both and in two hours her cough turned around and he never did get it. My dad said this was an old remedy that came from out east with Chestnut leaves and as a chestnut relative it’ll work the same.”—Kenneth Ruark, born 1934 in SW Missouri