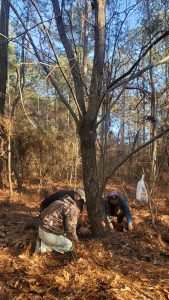 This weekend The Ozark Chinquapin Foundation made a trip to the heart of Louisiana to present at the Louisiana Native Plant Society’s (LNPS) annual meeting. The Ozark chinquapin used to be common in the upland forests of Louisiana but chestnut blight has made them so rare that they’re critically imperiled and listed as one of Louisiana’s species of greatest conservation need.

Emmie and Csanyi (pictured above) represent the next generation of passionate conservationists working to save the trees. They are the Vice President & President of the Louisiana State University Botany Club. They saw an Ozark chinquapin for the first time on this trip, so it was as much a treat for them as it was for us. After digging around for a while, they actually found a few nuts and remnants of burrs. The nuts they found were seed shells discarded by squirrels after removing & eating the nut meat inside.

The soil here is sandy. The most common trees I noted were pine, yaupon holly, magnolia, American holly, beech, dogwood, and red oak.  A majority of those species are evergreens and the Ozark chinquapin under the closed canopy of this forest are constantly shaded by the surrounding trees all year long. We only found a few nuts and burrs around the first Ozark chinquapin tree—and this could be part of the reason why. Adequate light is needed to produce female flowers (the part of the tree that turns into burrs with nuts).

The second tree Brian led us to was not very far from the first tree. The tree had a few sucker sprouts around the trunk. 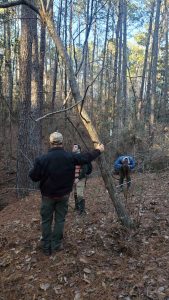 The Ozark chinquapin in Louisiana look exactly like Castanea ozarkensis I’ve seen in Missouri and throughout the Ozarks. The leaves are the same size as well. If we had to guess the age of these trees we would say they are about 35 years old. I believe they are about the same age even though the first tree is larger.

The Ozark Chinquapin Foundation will continue working with local agencies and leadership in Louisiana to partner together to save and restore the tree. We will keep you updated on the progress we make with this initiative!