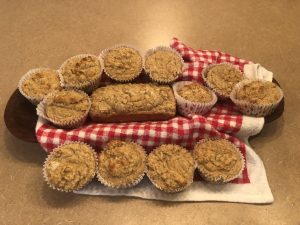 You can do more than eat an Ozark chinquapin nut raw.   Raw chinquapin nut meat is a sweet treat to be sure.   I enjoy watching the expressions on peoples’ faces when they eat their first chinquapin.  It is a combination of joy and surprise.  While this is good and enjoyable, you can cook with these nuts too and one of the most ancient methods is to make bread.

Chinquapin bread comes to us courtesy of the aboriginal people of the Deep South.  People like the Cherokee, Creek, Choctaw, and Catawba all have variations on using chestnuts and chinquapins for this dish.   The bread is a wonderful combination of corn and nut meat to create a nutritious delight that comes from the forest and the field.

Curious, I did some web sleuthing and looked at every wild edible book I owned.  I found a number of recipes that all danced around the same central theme.   Ground corn combined with nut meat from chestnuts or chinquapins.  A few additions here and there but all had the same foundation.  Most of the recipes that go back to historic times involve wrapping the resulting ground meal mix in a corn leaf before boiling.  Today, it might remind us of something like a tamale.

Before any European ever set foot on North America, Native Americans were growing corn and harvesting chestnuts and chinquapins.  The corn they used was dried and ground in stump mortars or stone mortar and manos. The chestnuts were boiled to soften the shells and allow the skin (known by botanists as the pellicle) to be removed.  Boiling softens the chestnut making it easy to mash. Combined with the ground corn the mixture could be kneaded to make a tidy meal mixture.

Most recipes for chestnut cooking involve scoring the nutshell with a knife so it does not explode while heating.  No such scoring is needed for chinquapins.

The corn leaves will then be blanched to sterilize and soften the leaf. Once removed and allowed to cool a dallop of nut bread meal would be placed on the leaf and then the edges folded like an envelope. One corn leaf would be torn into inch wide strips for tying the package off.  The packet would be gently placed in a pot of boiling water and allowed to simmer for 50 minutes or so. 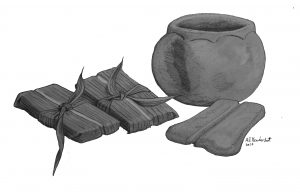 Prehistoric tribes had the ability to harvest salt and make sugar or syrup from maple, hickory and walnut tree sap.  So, both of these cooking items could be added along with any dried berries they chose depending on preference.

During historic times the Native Americans had access to new baking ingredients as baking soda, eggs, butter, and cane sugar became increasingly common. This allowed the recipes to change somewhat.  But the foundation of the recipe was conservatively the same – nuts and cornmeal.  The recipe that I chose to use was a Cherokee recipe that was passed down through the decades. It was published by Doug Gillis in the summer 2011 issue of the North Carolina North Carolina chapter newsletter of The American Chestnut Foundation. The article, “Culinary Corner: Cherokee Style”, was an informative look at this recipe.  This recipe included baking soda, salt, and sugar, with the rest of the process essentially the same.  If you want to follow Gillis’ boiled nut bread recipe visit https://www.acf.org/wp-content/uploads/2016/09/Summer_11_Mast-2.pdf

With my research concluded, I grabbed a Ziplock of Ozark chinquapin nut meat from the freezer that I had from a low blight resistance tree.  They were leftover from a bag of seeds used for nutrient analysis.  For those results visit https://ozarkchinquapinmembership.org/nutrient-comparison/

I shelled the nuts by hand and removed the skins.  If I were in an historic Cherokee household shelling and cleaning the nuts would have taken as much time as grinding the corn meal.  To learn more about the time investment and yields from shelling chinquapins visit: https://ozarkchinquapinmembership.org/weights-and-rates/

I had all of the other ingredients which I will list below with the recipe.

My itch to try this was at an inopportune time when corn was out of season.  Nothing was in the fields but stubble, and I couldn’t find any corn on the cob in the produce isle.  Undeterred, I chose to modify the recipe to a baked good.

The resulting muffins were full of flavor.  I would describe it as nutty flavored cornbread.  I did some taste testing with family and friends, and all had that same look like they had eaten their first chinquapin.  It was the exact same look of joy and surprise.  Most used the word tasty to describe the experience.  Because I didn’t boil this like the original recipe directed, the bread turned out a little dry and crumbly.  Not bad – just crumbly.  Next fall when I can obtain some more nuts, I want to try the original recipe with corn leaves.  Then, I also want to do this baking recipe again using butter to keep it moist.  I have modified the recipe below to include butter.  An alternative to butter would be applesauce.

If you want to try your own chinquapin nut bread, here is my modified recipe.

Cook muffins for 16 minutes and pan for 20 minutes or until the top is golden brown.