Pollen can be a clue to the past. But it gets first billing for the misery some of it causes. Pollen can be the bane of an otherwise enjoyable growing season. About the time temperatures are comfortable enough to be outside, allergy season kicks in and reminds millions of people what the plants are up to. I am one of the afflicted and unfortunately I tend to think like a lot of people by associating pollen with the symptoms I suffer. However, not all pollen inflames symptoms and some of it can tell a story. 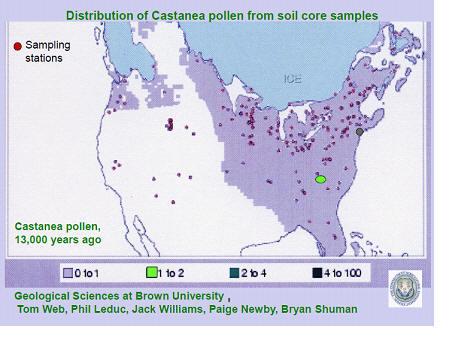 The reality of this became clear as I studied the Ozark chinquapin tree’s pollen record in the Ozarks. Steve Bost introduced me in to this marvelous tree in 2005. Since then I have enjoyed chatting with Steve Bost about all things chinquapin. One thing we have tried to do is find out where the chinquapin was found across the eastern United States and how far back did it occur through time. The answer to our questions was found in the tiniest of materials – pollen.

If we aren’t sneezing or watching bees zip from bloom to colorful bloom, most of us ignore pollen. Sometimes we don’t even realize it is all around us. It is understandable when some of the grains are measured in micrometers or microns, which is 1/1,000th of a millimeter. If we measured a 0.7 mechanical pencil lead it is just less than a full millimeter. 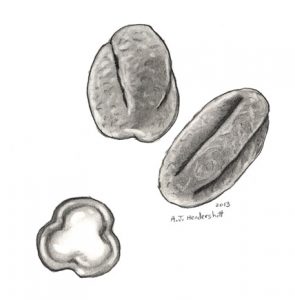 So if pollen is so small you might wonder how scientists find any of it at all. Fortunately for researchers plants produce huge amounts of pollen. As a result thin layers of pollen can accumulate all over the forests and fields around us. Look at your porch or patio furniture in the spring. A thin accumulation of yellowish dust is the telltale presence of tree pollen. In most cases that pollen gets recycled by decomposers but in special places it gets preserved.

Acidic or oxygen poor pools of water like sinkhole ponds and bogs become precious time machines that tell a story of what lived around that water hole. The acidity or lack of oxygen prevents decomposition. So over time the layers of pollen are allowed to accumulate. Ozarks sinkholes plugged up that catch water and become ponds are great laces to find ancient pollen layers.

To understand how this works think about lasagna and its repeating layers. Noodles, sauce and cheese are put on in repeating layers. It’s the same with pollen. Trees make pollen in spring, followed by grasses and wildflowers in summer and ragweed in the fall. Each year the pattern repeats. This may seem rather predictable and perhaps mundane but the interesting part comes when researchers compare years, decades and centuries. They find big mood swings in what is growing in an area.

Take for example an area with a large thick layer of grass pollen that repeats hundreds of growing cycles all of a sudden gets really thin and is dominated by tree pollen. Ecologists tell us trees need more water than grass, so it can be interpreted that the grass grew during warm dry periods while the trees took off when the area began to get more ample rainfall.

Climate clues rest in the layers of pollen in these decay resistant pools.

Back to the Chinquapin: 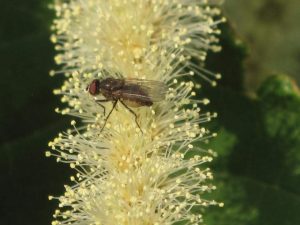 Despite the inability to tell the species apart the pollen at least tells you the family was present in a regional forest.

Two studies from Cupola Pond in Carter County Missouri indicate some interesting results. Researchers cataloged the different families of pollen they found. Trees, grasses, and wildflowers were all found in the pond’s aquatic time capsule. A healthy list of plant families was developed and a timeline for when they show up or are absent was developed. The Ozark chinquapin or one of its cousins was first recorded in the Ozarks roughly 22,000 years ago. It was detected throughout the years leading up to and following the ice age. So it has been a longtime Ozarks relative.

The second bit of insight revolves around tree abundance. No one was really doing forest inventory in the 1800s so it is hard to say what percentage of a forest was composed of any type or species of tree. So we really have no historic account for how many Ozark chinquapins there used to be before the chestnut blight devastated the trees.