Schoolhouse Memories of the Ozark Chinquapin and Hully Gully 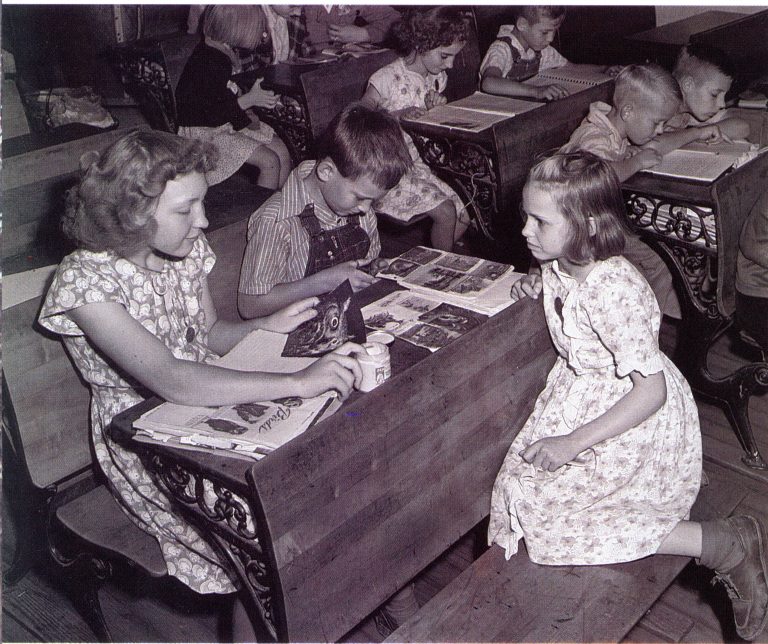 Schoolhouse Memories of the Ozark Chinquapin and Hully Gully

“The teacher said it was against the rules to bring chinkeypins to school.”

These were the words of Bob Ross (not the PBS painter) who was a volunteer at Hobbs State Park and grew up near Garfield. He reminisced about Ozark Chinquapin nuts affectionately known by hill folk as “chinkeypins” during the late 1940s. Ross shared his memories at a public Ozark Chinquapin Foundation meeting on March 22, 2013.

Ozark chinquapin trees are a relative of the American chestnut and sheath their nut in a spiny protective burr until ripe. Ross gathered these nuts from the wild and brought them to school during his childhood, but he wasn’t alone.

“I took chinkeypins to school,” said Al Knox who worked at the park as the Trail Maintenance Supervisor, “The more you had, the more popular you were. A pocket full of chinkeypins was a good thing to have!”

Part of the reason the nuts were so memorable was their flavor and ease for processing.

“The nut was easy to crack with your teeth; you would just bite the nut in two with no need for a nutcracker,” Knox said.

Robert Barnes of southwest Missouri remembered collecting the nuts for use at school, “My Grandma use to have two great big Ozark chinquapin trees in her front yard, and we would fill our pockets full of them on weekends and then go to school on Mondays and eat on them all day long and pass some of them to friends to eat.” Said Barnes. As he recalled the spread of nuts underneath the trees he mentioned, “They was so thick on the ground they would just cover it.” 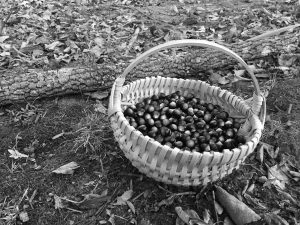 Warren Langham of Fayetteville Arkansas was born in 1922 and shared his memories of chinquapins at school.

“I remember a grove a quarter mile from the school. It had five big ole chinkeypins. Every fall those burrs would open up and release those chinkeypins. As kids we had liberty to go where we wanted to. We went as a bunch to the grove. A lot of us wore overalls so we stuffed our pockets plumb full of chinkeypins and took them to school,” Lagnham said.

Chinquapins were more nutritious than most school children back then would have suspected. Yes, they had a pleasant, sweet flavor thanks to the carbohydrates in the nut meat. But they were also high in protein and some heart healthy fats. This meant the satisfaction of eating them would have stuck with the children through the afternoon hours.

“We would crawl around on our hands and knees to collect the nuts. We just tried not to get those burrs in our hands,” Langham recalled.
Several of those who attended the meeting recalled coming to school with pockets full of chinquapins every autumn. But it wasn’t eating the nut that got the children in trouble.

Wilma Obenshain, of Rogers, mentioned that she traded chinquapins.

“One time I got in trouble over a 5-cent matchbox full of chinkeypins. I was trading them for something, marbles or I don’t know what. They spilled out all over the floor during class and we got caught.”

Knox had his own chinquapin confession.

“When the teacher wasn’t looking, I would roll them on the floor, so they bounced off the black board up front,” he said.

Smiles filled the room with each confession.

Ross elicited chuckles as he told his tale of eating chinquapins during class. After cracking a handful, he would toss the nut hulls behind his seat into a rat hole that existed in the school building. He only did this when the teacher left the room so as not to get caught.

“At one point,” Ross said, “the whole room got really quiet, and they were really interested in their schoolwork . . . and I knew that wasn’t right. Then I looked back to see my teacher standing behind me and I had been tossing those nut shells right at her the whole time!”

Teachers put up with school shenanigans no matter what century they work in.

The thing that caused chinquapin nuts to be “banned” at some schoolhouses was a game known as Hully Gully.  It was a guessing game.

Also present at the meeting was Jim Taylor from Clifty.   He shared his recollection about this guessing game: “I gathered chinkeypins and took them to school in my pockets,” Taylor said. “I’d get a handful out to play hully gully.  The other kids had to guess how many chinkeypins I had in my hand. If they were right, then they got my chinkeypins.  But if they were wrong, I got so many from them.  It was a form of gambling.” 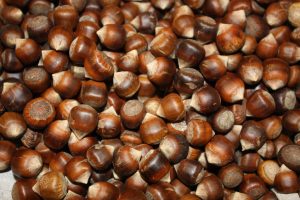 The chinquapins were highly valued nourishment for school age children. We have to keep in mind that for some of these children of the 1940s chinquapins might be all they would eat for lunch that day.  They were easily collected, easy for children to crack and eat and could be stored in pockets. Because they were so sweet, they were traded and even gambled for.  But those 1940s school day memories didn’t bring people to the meeting.  They remembered the Ozark chinquapin and what it meant to them, and they knew it was dying.

A fungus known as the Chinese chestnut blight decimated the American chestnut and its kin, including the Ozark chinquapin.  So, when the Ozark Chinquapin Foundation held its annual meeting at Hobbs State Park, it drew out the memories from attendees.

Many have high hopes that blight resistant trees can be found and bred for future generations to enjoy.

“God could have made a better tasting nut, but he didn’t,” Ross said.

The chinquapin nuts were once restricted from some Ozarks schools thanks to hully gully style gambling.  According to Ross, “that didn’t stop anyone.”  Perhaps some of that defiant resilience is an Ozarks trait.  If it is, then the Ozark chinquapin might have a bright future after all.