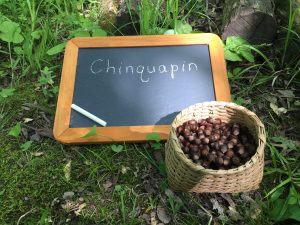 How the spelling of “chinquapin” has changed over space and time, and the oldest known accepted names for the tree

You may have noticed the Ozark Chinquapin Foundation spells chinquapin with a “qu” instead of a “k”.  There are other species like the Allegheny chinkapin and chinkapin oak that used the k spelling in modern times.   While this may cause some editorial confusion in this day and age, I was tickled to find out this seems to be a running issue through the ages with the word.

As an example of what I am talking about, look at this editorial piece from the Northwest Arkansas Times in Fayetteville. “To the gentle reader who called, while I was out of town, asked if I really didn’t know how to spell, c-h-i-n-c-a-p-i-n:  As a lifelong chincapin fan (I used to take pockets full to grade school with me eating half and throwing the other half at intellectual associates).  I confess I am better equipped to discuss their edibility than their spelling, however, knowing this to be the case, I took the trouble to investigate that point before writing about a couple of old chincapin trees last week.  According to Funk and Wagnall’s “The Standard Dictionary” (1940), the chincapin spelling is preferred, followed by chinquapin and chinkapin.  According to the World Publishing Company’s “Webster’s New World Dictionary of the American Language” (1960, College Edition).  Chinquapin is preferred followed by chincapin and then chinkapin.”   Monday, May 8, 1966.

Spelling chinquapin, it seems has always been a challenge.  Captain John Smith was the first person to try to take the Algonkian word and phonetically spell it.  In his 1624 General Historie of Virginia, Smith writes, “They {the Indians} have a small fruit growing on little trees, husked like a chestnut, but the fruit most like a very small Acorne. This they call Chechinquamins, which they esteeme a great daintie.”

I am not sure Smith could have consulted a dictionary as he was the first one, that we know of, to have written the word down.  While he was describing the nut as a little acorn, you can hardly fault him.  Minus their covering they are nearly impossible to tell apart from an acorn for the casual observer.  Over the decades since, spelling the word “chinquapin” has generated a little confusion and plenty of editorial angst mixed with some certainty.

This reporter form the Richmond Dispatch seemed to have a clue about the word’s origin and had fun explaining the variations.  “Moreover, the children can quote a very ancient authority, who declares that chinkapins make good eating.  In 1670 S. Clarke, in writing of the “Plantations of the English in America” says: “They (the Virginians) have many goodly groves of chincomen trees that have husks like a chestnut and are good meat either raw or boiled.”  Note how this old worthy of the long forgotten past spells the work.  His dictionary – if he had any at all – was less plethoric than ours, for now we can write the word three different ways – chinkapin, chincapin, or chinquapin.  Moreover, we are told that our forefathers had two more methods of varying their orthography – chincomen and chechinquamen.  The word, we presume, is of Indian origin. . .  It is noticeable, however, that the popular tendency all along has been to simplify spelling, until today, we are permitted to adopt the phonetic way of writing it.”   Richmond, Virginia. September 9, 1902.

Please keep in mind that there was no distinction between the Allegheny chinquapin and the Ozark chinquapin during the 17th through 18th centuries.  Spiny burred nut trees were classified as either a chestnut or a chinquapin.  There wasn’t a third choice.  So, a chinquapin, was a chinkapin, was a chincapin.

As a side note spelling chinquapin is not the only matter of variance.  Saying it carries with it some differences as well.  In the Ozarks I hear a lot of octogenarians (those in their 80s) say “Chinkeypin”. Some even spell it the way they say it.  While everyone recognizes this is a slang derivation, it apparently was spoken that way in other parts of the nation as can be seen in this October 7, 1877 excerpt from the Atlanta Constitution in Georgia, “The Dekalb County News spells it “chinkeepin,” wherefore we conclude that “chinquapin” is not correct.  During the Feeley campaign we wrote, “Chappaqua so frequently that our orthography did get slightly out of gear.”

Chappaqua is a town in New York and Feeley, I assume, was a candidate who made the news forcing publishers to learn the correct spelling of the town, leading to the comparison with chinquapins.  Now back to our beloved tree and the spelling of its name.

Below are a number of newspaper clippings from around the United States that recognize spelling chinquapin may not be as simple and straightforward as it seems.

This reporter wanted readers to know he did his homework.

“The chinkapins, or chinquapin, (Webster says both spellings are correct) are now ripening, and the boys are now gathering them.  The chinkapin is a species of the chestnut.  There are yet many trees on the hills near Bridgeport and also in the Grampians.”  Wilcox Progressive Era, Camden, Alabama, September 15, 1921.

Sometimes the news is all in the way you tell the story. . .“A gentleman of this city some time ago had been dealing in chinquapins and was about to get overstocked.  He concluded to inform those he was buying from that he could not take any more from them, and accordingly sat down to indite them a note to that effect.  He got along very well until he came to the word “chinquapin” and here he was stumped.  He made two or three efforts but failed every time.  At last a bright idea struck him and he wrote the note thus: “please don’t send me any more of these d….d things”  — enclosing two chinquapins.  We presume the note was understood.”   The Bossier Banner, Bellevue, Louisiana, December 2, 1871.

Newspaper editors and reporters had a way with language to be sure, even if the editor was not himself sure.

Take the May 28th, 1953, edition of The Messenger from Madisonville, Kentucky where the editor was eulogizing the chinquapin decline due to Chinese chestnut blight.  With his tongue firmly planted inside his cheek he typed, “Its disappearance is not an unmixed blessing.  It was always hard to spell.”

Some editors got on their high horse about the spelling when dealing with those who disagreed with them.  This editor was calling out his fellow editor from another paper, “Chinquepins are ripe.” – Watuga Democrat.  Spell it right, brother; chinquapins, chinkapins, chinkapins, never chinquepins.”  The Weekly News, Lenoir, North Carolina, October 3, 1902.

On the flip side some editors had fun with the disagreement.  Enjoy this entry to the Atlanta Constitution on October 2, 1877, “—Seventy-eight Georgia editors can’t spell chinquapin.  By the by, is that right?”

More friendly fussing made ink in the Davie Times.  Mocksville, North Carolina, on December 14, 1888, as the editor decided to put his counterpart at another paper in his place regarding the spelling of the local tasty nut.

“Our esteemed friend, the local quill driver of the Winston Republican, thinks he has “put the fixins’ on us.”  He would have his readers to think we have made a dreadful mistake in the misspelling of a word.  He says we spell ‘em “chinkapins.” We don’t know how his dictionary spells ‘em, but Worcester’s spells ‘em that way.  Worcester also spells ‘em “chinkapin.”  Webster, which is also considered good authority, {at least we have been taught to believe him reliable], spells ‘em “chincapin” and also spells ‘em “chinquapin.”  Now, Mr. Local Editor of the Republican, you may spell ‘em “chinquapin,” or “chinkapin,” or any way you please, but we shall continue to spell ‘em “chincapin,” believing that to be as short and as good away, and certainly as correct a way as any.”

Spelling a word is important to publishers.  They take pride in doing it right.  In as much they represent all of us.  We all want to say and spell things correctly. Then a word like chinquapin comes along to confound and confuse.  Multiple “correct” ways to spell the word makes things difficult.

I reviewed 427 newspaper articles written in over 16 states where chinquapins were mentioned.  Articles ranged mostly from the mid-1800s up to the 1960s.  Here are the stats on the spelling:

•  The spelling “Chinquapin” was used 385 times

It was interesting to note that of all the uses of the spelling “chinkapin”, Virginia newspapers composed half of them.  It is no surprise that local trends occur.

Over the years the hands down, most common spelling for our beloved nut bearing plant was chinquapin.   That alone would be enough, but there is more.  The Ozark Chinquapin Foundation chose the “qu” version as it speaks to the rich history of the tree.  At the time it was, as we thought, the older version of the word and we were just embracing the old ways for an old and wonderful tree.  Little did we know there were more ways to spell this word.

Admittedly spelling chinquapin instead of chinkapin causes some confusion.  But some confusion was going to exist regardless.  There is confusion about chinquapins being one or two separate species.  Is the Allegheny chinkapin (Castanea pumila) one species with a subspecies in the Ozarks? Or are there two species one being a shrub (Allegheny) and the other a tree (Castanea ozarkensis)?  While science supports the latter, confusion remains today.

As if that didn’t generate enough head scratching, there is a chinkapin oak that is often mistaken for the oh, so wonderful, Ozark chinquapin.  Chinkapin oaks are certainly more common to come by, and to be discussed even though they are very different.

If nothing else the spelling helps differentiate one chinquapin from another chinkapin.

So we have taken a position, but with it comes a promise.  We promise to be gracious and avoid argument.  If you contact us and use an alternate spelling we will not be rude or correct you.  As you can see many spellings have been and continue to be correct.   Our foundation will stick with the “qu” spelling as a matter of respect for the past and orthographic consistency.

No matter how you spell it, keep looking for them, collecting them, protecting them, enjoying them and growing them all you can.  One day, when we restore this tree; perhaps the only trouble remaining for it will simply be how to spell its name.