The Curious Case of The Ozark Chinquapin 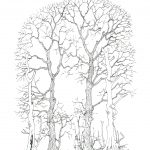 What sort of tree was the Ozark chinquapin when it once grew in undisturbed older Arkansas forests? It has been about fifty years since the tree was affected by chestnut blight. There are numerous root sprouts still surviving in our woodland, but they cannot ever attain the stature of the tree as it once grew among other older trees in a mature forest. The best we can do is to look at the remains of big trees where they lie on the ground today. My objective was to find the well-preserved remains of old chinquapin trees on the ground in an area where mature trees are growing today, and where the forest appears to have been mature and relatively undisturbed at the time when blight first arrived in 1957.

I spent several years looking at forest plots in parts of the Ozark National Forest and various state parks in Washington and Benton counties. I could find remains of old chinquapin trees, and many of these were quite large. The lower trunk of chinquapin trees tended to decay out from the center so that the fallen log became hollow and the wood collapsed into a pile of slabs. That made it difficult to estimate the former diameter of the tree. Observation of trees such as oak today shows that open-grown trees often have enlarged bases that are not typical of taller and straighter trees that grew up in competition with other trees in a closed forest. American chestnut planted out in the open away from places with endemic blight seem especially prone to having expanded buttressed trunks that are far different from the straight and tall trunks of forest grown trees. Ozark chinquapin likely had a similar growth form when growing in the open or in heavily disturbed woodland. Many of the old chinquapin logs show strange forms of crookedness, and some of that could be attributed to disturbance or damage (see sample photo of contorted trunk below). So, my search was for Ozark chinquapin remains that were unusually large, but also well preserved and found in a situation that indicated a minimally disturbed woodland for many years before blight appeared.

The two best examples I could find were located on the top of a narrow ridge in the Wedington block of the Ozark National Forest about 15 miles west of Fayetteville (see photo of one of them below).

The site was a typical dry ridge with black and post oaks and Texas hickory, many of them two feet or more in diameter. The oaks and hickories were between 60 and 70 feet tall and otherwise typical of trees growing on such upland, well drained sites. Approximately 45 feet of trunk were preserved on the two old logs. The hollow wood at the base of the logs had begun to collapse so that it was hard to estimate the original basal diameter, but it was probably somewhere around 18 or 20 inches not counting the bark. Both logs consisted of a single upright trunk, but each still had a number of the bends and kinks that are often seen in old chinquapin wood (see four typical examples below). Both also had little slow-growing “branches” (based on ring widths) arising from the root collar. These are features rarely seen on other species of the oak-beech family but seem to have been a regular feature of  chinquapin. Such basal sprouts might be attributed to injury for some trees, but the relatively undisturbed environment of these examples and the frequency with which they are seen elsewhere suggests that they were a natural occurrence.

As well preserved as these two logs were, their upper branches were missing. The diameter of the stubs of these branches varied from two to four inches, and it was unclear how much longer they were when the trees were alive. The best I could do was to look at the crown structure of the largest Ozark chinquapin spouts I could find alive at the time. Some of these sprouts became large by generating new stems under release conditions and are subject to rapid growth of as much as six feet in a single season, hence not typical of older trees. I looked for large living sprouts that had gone beyond that rapid growth phase and were subject to typical closed forest competition. I used the branching pattern observed in these examples (see figure below) to “flesh out” the tops of the two otherwise well-preserved chinquapin logs.

My reconstruction then proceeded by raising my carefully measured planforms of the two logs to a vertical position and then adding the extrapolated branching to the broken tops of the logs and thickening the trunks to include typical deeply corrugated bark. The resulting diagrams show upright trees about 65 feet tall. With bark added the twists in the trunks do not stand out as prominently on the reconstructed trees, but the growth form is still crooked compared to that of trees around them. Many of these “jogs” appear as what arborists call “bayonet joints”.

These are branch nodes where the main terminal growth bud or shoot has been damaged and a lateral bud assumed apical dominance (fancy term for growth control).

Many of us have observed that Ozark chinquapin can show rapid growth under good light conditions, and that the growth can continue late into the season. Such spurts of growth may not “harden” enough to allow terminal buds to survive the winter. This kind of damage is especially common here in NW Arkansas because of the continental climate – we are located in the center of the North American continent where atmospheric disturbances in the lee of the Rocky Mountains can produce sharp changes in temperature both early and late in the season.

After years of examining and measuring the size and shape of the original chinquapin blight kill, the figure below gives the best image of Ozark chinquapin in the undisturbed forests of NW Arkansas that I can provide using all available information. Reconstruction of two Ozark chinquapin trees in old growth forest before blight arrived.

Fred Paillet is Adjunct Professor of Geosciences at the University of Arkansas and Emeritus Research Scientist with the US Geological Survey.   He developed an interest in reconstructing the ecology of American chestnut as part of the project to use the ecological tolerances of forest tree species to reconstruct prehistoric climate regimes in New England.  A major boost was given to this work by the discovery of outlying naturalized chestnut stands in Michigan and Wisconsin where the ecology of the tree could be studied without recourse to pollen analysis or searching through early forestry archives.  Extension of these studies to Ozark chinquapin were a natural byproduct of the selection of NW Arkansas as his retirement home.

Chestnut: History and Ecology of a Transformed Species –The character and distribution of American chestnut populations in New England are analyzed to identify the extent at which introduced chestnut blight and land use have effected chestnut distribution and life history.

Fred’s book, Ozark Forest Forensics, interprets our natural surroundings in a way that enhances a simple walk in the scenic deciduous woodlands of the Ozark Mountain region. Explanations go beyond trees and their habitat to include other diverse subjects: the leaf litter beneath a hiker’s feet, strategies used by wildflowers for pollination and seed dispersal, diseases that can ravage our forests, and forces active in the landscape that impact conservation efforts. Simplified line drawings demonstrate specific points of interest in a way that visually cluttered photographs cannot do.